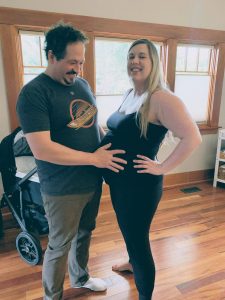 Pregnancy was not the magical experience I had always envisioned it would be, and the lead up to the birth was no different. I had (mistakenly) assumed I would go into labor around 38 weeks and my first lesson of motherhood started with our sweet boy coming right on time, one day before his due date, teaching me I am not in control of everything. Those last weeks of pregnancy are the most uncomfortable, every day thinking you cannot get any bigger or any more sore, and every day being proven wrong! The show started Wednesday morning around 8am, but I wasn’t sure that it was starting at first. I had been having small irregular contractions for a few days before hand and these didn’t feel any different. There was no popping feeling or gush of water, just a little liquid and a small amount of blood. After about an hour of regular, but still not very intense contractions, I called Joel and told him he should head home from work but not to rush. Then I called the doula and the midwife and filled them in, they both said to try and rest, time the contractions and keep them posted. Our midwife said she would come by in a few hours to check on me. Thirty minutes later the contractions had ramped up to the point where it was hard for me to talk even between contractions, and they were coming every 60 seconds and lasting for 30 seconds each. We called the midwife back and she decided to come right over. At this point I turned to Joel and the last thing I said to him was “well this is going to suck,” then I promptly threw up and didn’t speak again for 7 hours.

We had taken hypnobirthing as our birth class and wanted to have a natural home birth like those calm easy births in the videos. While I didn’t necessarily buy into the whole ‘breathing through a pain free labor’ I do believe in the power of positive thinking and did my best to visualize that outcome and not think of all the things that could go wrong. I listened to my meditations nightly and just planned on that kind of birth and we were fortunate enough that that birth came true.

When the midwife arrived I had moved upstairs to the bed and was breathing through contractions but unable to talk. I entered active labor almost immediately and my contractions were at 1 minute intervals almost from the beginning. After a couple hours of laboring in bed the midwife had arrived, checked me, giving me an IV and gotten the tub set up and I was able to move into birthing tub. For anyone debating a water birth I wou 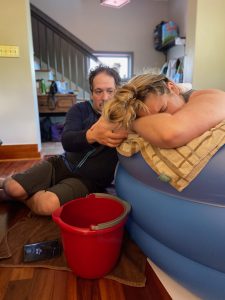 ld highly recommend it. Even though the contractions continued to get more intense being in the water helped immensely and allowed me to change positions as much as I wanted to. By hour 4 I was having back to back 30 second contractions still with only a minute in between, accompanied by some constant nausea that made it hard to eat or drink anything. Our doula would waft some peppermint oil under my nose occasionally which helped and brought coconut water to my lips often so I could drink some when I was able to. Joel was an amazing birth partner and stayed by my side the entire time holding my hand, massaging my shoulders and back, and helping me change positions. We learned so many labor tricks and there were so many spinning babies techniques I wanted to utilize during my labor but when it came time the pain was so intense I wasn’t able to do anything but breathe. I want to give a shout out to women who have natural births in the hospital and turn down that offer of an epidural because had it been an option that was offered to me I don’t think I could have! Throughout the labor our midwife was doing intermittent fetal monitoring and after about 5 hours checked my dilation. I managed to ask how far I was and our midwife looked at me and said “do you really want to know?” and I responded “no, not if you’re asking me like that!” after everything was over she told me she was so glad I didn’t know how far along I was during the labor because after being at 2cm from week 37 on I only got to 5 cm until right before I started pushing, and hearing that number after hours of labor can be demoralizing and even cause labor to stall. If I could share advice for mama’s about to have a baby it would be to not ask what your dilation is during labor, and if you’re wanting a natural birth at the hospital, make it clear to everyone at the hospital not to ask you if you want the epidural yet, because I think it’s a lot harder to turn down an offer of less pain than to ask for it.

Throughout my labor contractions were central in my lower abdomen, I was lucky enough to have no back labor, and aside from the nausea, didn’t feel much in the rest of my body. All of sudden the pain and pressure started moving from my abdomen to my perineum and tailbone. At this point our doula looked at me and asked if I wanted to push, and after she asked that I realized I did! 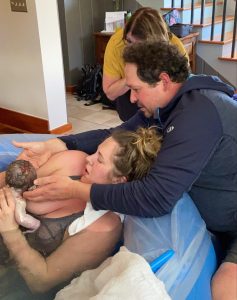 At this point the midwife came over to do another cervical check and told me to try pushing which was possibly the most painful part of the birth, and that’s when things started happening. I felt like I had to be on my forearms and knees to start pushing, and by now the pressure had intensified tenfold, which I wouldn’t have believed possible, and localized in what felt like my rectum and tailbone. Something that amazed me and I feel like is a perk of natural birth, was that I knew exactly when I needed to push and when to stop and rest. During this phase even though the pain was so intense during contractions as the baby was descending down the birth canal, in between contractions there was absolutely no pain, which is still mind boggling when you think about it, so I could truly rest for that minute in between. Our midwife had placed a mirror in the water to see what was going on while she was applying counter pressure to my perineum and kept asking if I wanted to see or feel the baby coming out and all I could say was “No, I feel everything!” Joel loved being able to see our baby’s head emerging in the mirror though. I tried my best to implement my breathing techniques and keep my pelvic floor relaxed during pushing, but it was hard! Again I give so many props to mama’s who spend hours pushing their babes out, after (only?!) 15 minutes our sweet boy was here and the pain was over. 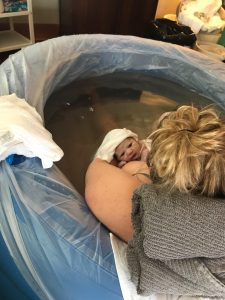 I will never forget that moment when he was placed onto my chest, opened those big eyes and searched for my face, it was everything I imagined it would be. We were able to stay in the water for the next 45 minutes or so, Joel cut the cord after it had stopped pulsing (delayed cord clamping option!) and we opted not to use pitocen to deliver the placenta which I delivered about 30 minutes after baby. While this was nowhere near as painful, it certainly wasn’t comfortable and our midwife did help by massaging my abdomen. When I was ready I moved to the couch with help from the midwife and her assistants while Joel held our baby for the first time, and she examined me and stitched up the mild tear I had gotten. I know this is a major concern for a lot of women, and it was for me, but honestly I didn’t even feel the tear and after a few lidocaine injections couldn’t feel the stitches going in. This is not something I would even worry about going into labor again now. 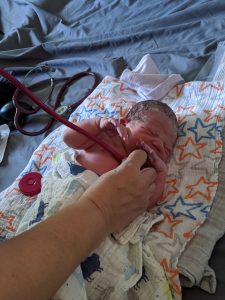 After an hour or two we all moved up to the bedroom and our midwife did another round of checks on me. My blood pressure was low and I was still nauseas making it hard to eat or drink so she stayed awhile longer to monitor me. Then baby got all his checks right in bed with us which 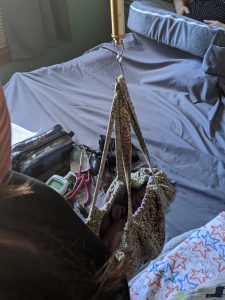 was fun to be a part of. Our midwife did 4 more home visits in the next 2 weeks which was wonderful not to have to leave the house for. I absolutely loved the home birth experience, I felt so well cared for and loved being able to text our midwife with any questions throughout my pregnancy and postpartum. That’s our story! I feel lucky to have had the birth I set out to have and hope that reading about a positive birth story helps others have the birth experience they want.

Take care and live a life of wellness.